Freedom is Only, Ever, Always, Now.

You say over and over that we shouldn’t have a goal, but isn’t wanting “doubtless knowing” sort of a goal? And how can you do this work and not want that?

You know you are here?

This knowing is here.

Is there a past or future?
.
Right now, if you don’t go into the mind,
in truth, in reality,
are there any problems?

Now is when it’s doubtless.

If you ask, “When is it going to be doubtless?’’, then you’re just back in the beliefs of the mind. You’re not abiding as truth, you’re abiding as mind. So, when that thought comes up, which of course you didn’t create, what do you do? Ignore it!

It’s time to get real, and by real I mean, ignore everything that’s in there. Don’t change anything, don’t get rid of it, suppress it, repress it, nothing. Since you want freedom, freedom is only, ever, always, now. So if you want freedom, have it now!

Let’s be on holiday.

I’m getting a headache . . . which is an indication to me that my mind is not buying it – at least not one hundred percent!

You have to be a little stubborn as far as this goes. I don’t mean stubborn in the way that the mind has an idea and stubbornly holds on to it and stubbornly puts it forth. That’s the wrong “stubborn.” The stubborn I mean is refusing that whole movement of seeking for something (a condition, state, experience, etc.) in the future. Refuse it, stubbornly! Ignore and notice that freedom is here, now. Be stubborn in that way. Do you see?

It can be a little challenging to ignore it when it won’t shut up!

This is where the apparent conundrum comes in for you, and for everyone. I say it’s not trivial so that you keep being free, now. Then, what happens is you hear me speak about being finished and being doubtless, and you turn that into a path that is going to happen in the future. But I always say, “Forget that, and recognize freedom, now. Again, recognize freedom, now.”

We’ve been convinced all these years by culture that the thoughts that appear in the mind are important and should be listened to. That is what culture, religion, and society tell you—thinking and beliefs are very important and you need to pay attention to them. So, we are not used to not paying attention to them. There’s still the idea that there’s something of value in there that we are supposed to pay attention to, like good sheep, like good citizens of the state.

So then, it is just a matter of living this. Live it. If you don’t live it, you are living in the lie. At this moment, just say, “No, I’m going to be free.” Just know, without doubt, that anything in the mind is just Samskaras that have nothing to do with You. They weren’t there when you came out of the womb. You didn’t have all these ideas, all this seeking, all this spirituality, and all this enlightenment stuff! How could you?

When you came out of the womb, you were in the pristine state of essential knowing. And then, that pristine state got polluted with the Samskaras of culture and religion. Now, I’m telling you that those pollutants are not yours, and you don’t have to give them any credence, any respect at all. Nothing! You have to give them nothing! The only thing that you should give credence or respect to is yourself—your pristine essential state, which is the same now as it was when you came out of the womb.

Be a Bhakta (devotee). In a way, you’ve got to have the courage to say, “Fuck it” to all the Samskaras of culture, society, religion, and spirituality. Say, “No, you’re lying to me. There is no future where I’m going to become more enlightened or more doubtless. That’s a lie. There is only now.” 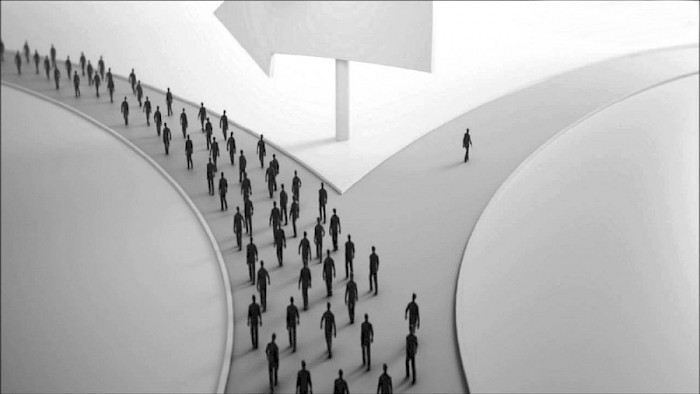