From the introduction to the book, Liberation IS - The End Of The Spiritual Path

Until the age of thirty-nine I had no interest at all in matters of enlightenment, liberation, spirituality or whatever you may call it. When I was a late teenager, having been in Catholic high school and seeing nothing in the whole religious environment that appealed or spoke to me, I summarily dismissed it all and never thought about it again.

For the next twenty years I pursued a career in music, and along with that a lifestyle of partying and abusing drugs and alcohol. I was not unhappy, but was just bored with ordinary consciousness and looking for a heightened experience of life. I was a seeker in the realm of the mundane - success, acclaim, money, drugs and alcohol - and had some of all of those.

One noon in February of 1997, at the age of thirty nine, after a night of extreme excess, I found myself looking out of my East Village, Avenue A apartment in Manhattan, feeling the noonday sun, seeing everyone outside doing their thing, and knowing without a doubt in my mind that I had destroyed my life. I was completely devastated and crushed. In a moment of total desperation, with not a shred of hope, and all sense of security ripped away, I fell, with no volition of my own, to my knees in an anguished plea for help. This was not a plea to god or anyone else; it was just, "HELP ME!"

With the amount of drugs I had in my body at that time there is no way on earth I would be able to sleep. But, immediately after that plea I did indeed fall asleep. Three hours later, in mid-afternoon, I woke up, and knew something had remarkably changed. I knew exactly what I needed to do. I walked right away to a bookstore in Saint Mark's Place and straight to the Eastern philosophy section I had once seen. I picked three books by names I had heard - Thich Nhat Hahn, Osho and J. Krishnamurti. From that moment on, drugs, alcohol and cigarettes were finished, with no effort or struggle. So began my seeking in the spiritual realm.

I began reading every book I could find and tried to meditate. Very early on in my seeking days I had a strange experience. While sitting on a bus I spontaneously began going back in time through my life. At each point along the way, progressing backward to when I was a very young child, I experienced my life circumstances as if I were there then, seeing out of the eyes of the person I was at that time. In each moment, no matter how far back I went, no matter how different my body and mind were from now, I saw that I had not changed even one iota. I was the same always. And then going forward in time until old age, I experienced the same thing. I thought, "How can it be that I have not changed at all even though everything about me has changed so much?" Unable to see the implication of this revelation, and certainly not yet ready to be finished by it, I chalked it off to just a peculiar experience.

In early 1998 I went to India for the first time on a spiritual retreat. During that retreat I began having mystical experiences and states of such incredible intensity, ecstasy, sublimity, revelation and transcendence that I was stunned. Completely and radically different states of consciousness than I had ever known, I had no idea things like this were possible. No drug experience I ever had could compare.

Over the next couple years I continued having these experiences. More and more I wanted to be in India. But in the meantime I went on several meditation retreats in USA, Sweden and France. I also met many teachers - U.G. Krishnamurti, Douglas Harding, Toni Packer, all of whom I still admire, as well as any other teacher that was passing through wherever I might be.

In 2002, four years after my first visit to India I returned and went to visit a sage named Ajja in Southern India. Before I went there I went to Mumbai to meet Ramesh Balskekar, but mostly I went to visit the home of Nisargadatta Maharaj. His book 'I Am That' had never left my side since I had begun seeking. When I got to Ajja's ashram, for some reason he took a liking to me and so I stayed mostly there for two years, meditating eight hours a day. But after two years the concept of liberation was foremost in my mind and even after all of the spiritual experiences I had had, and after living with this authentic sage, I was not satisfied. In 2004 I left Ajja and went to Tiruvannamalai, the home of Ramana Maharshi.

This was taken in 2002, at the ashram of Ajja, Puttur, India. Sal is
sitting outside his room meditating. I am That is on the table next
to him. Ajja is sitting on his sofa at the end of the walkway. 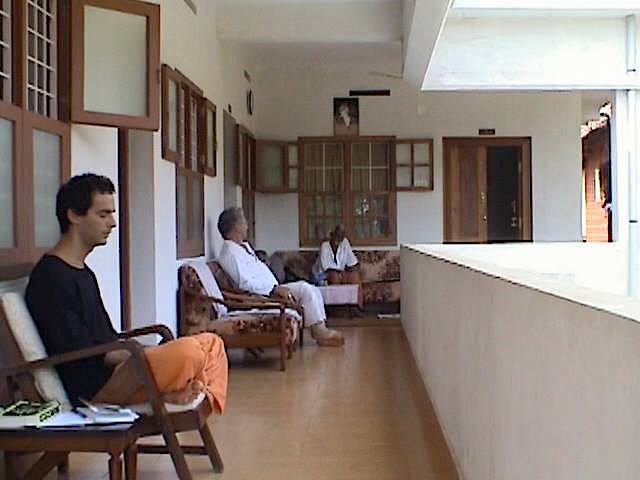 Again I began meditating many hours each day. But now after seven years of meeting teachers, with no real results, I was no longer interested in meeting another. Someone told me about a silent sage named Siva Sakthi. He really stressed that I should go, but I was not interested. Eventually he convinced me just to check her out. As soon as I saw her I felt she was very authentic. She never spoke, she just sat there in silence, but it was evident. A week later I moved into her small ashram, the first person other than her son/caretaker, to live there. Over the next nine months I had many more mystical experiences and transcendent states of consciousness and meditated all the time.

In November of 2004, having had so many experiences, I was getting frustrated. Where is this thing called liberation? Why every time one of these experiences came and I was convinced this was it, did it then pass and leave me the same? When will the final, permanent experience happen? I felt that I would need to find a very secluded place and just live out my life in meditation.

At that moment, someone passing through Tiruvannamalai, told me I should go see this teacher in Pune named Dolano. On hearing her name and reading the words, The Last Satsang, on her website I knew I had to go. Two weeks later I was in Pune sitting with her. On the very first day I recognized my essential being of freedom. I knew that this was what had revealed itself to me on that bus eight years ago, but I had not yet had the eyes to recognize it's implication.

This very ordinary and obvious recognition, along with the inquiries she suggested, over time, simply ended all doubts and misidentifications until there was nothing left but the knowing, 'I am free.' Seeking was finished, there was no cause of it any longer.

After that, with my spiritual path finished, I kept living mostly in India and went back to making music. In 2012, eight years after my meeting with Dolano, and with no inclination to become a teacher or anything like that, someone asked me to share. I was very reluctant. Finally I agreed to speak with one person, with the condition that I would only continue if what I wanted to share truly worked. By that I meant that someone recognizes their essential free nature and is finished seeking. I found my own way of sharing, out of a need to do it, and so this work was born. Since then I have seen many of the people who have contacted me come to the end of their spiritual, esoteric and philosophical beliefs, recognize that they are free, and be finished with spiritual seeking. I am amazed and happy each and every time.

To this day my only interest with each person I work with is for them to recognize their free, essential being and be finished seeking. I simply point out, through inquiries, some things that you may not have noticed before, until this recognition is clear. I then spend time to make sure all questions are answered and it is doubtless.